Kansas School for the Blind turned 150 years of age. To celebrate this momentous occasion, current KSSB Administrators, teachers, and staff organized a gala. Former administrators, teachers, students, and family members traveled from far and near to share stories and anecdotes with old friends. A YouTube Video was created to commemorate this  special occasion.

History of the Kansas State School for the Blind

​The Wyandot Nation, originally Wendat or Ouendat, means people of the islands, and refers to their origin on the western shores of Lake Huron. The Wyandots were descended from the Iriquois, and were called Hurons by the French because the “Mohawk” style haircuts on Huron warriors reminded them of the bristles on a wild boar’s neck. The Wyandot Nation ceded all lands in Ohio and Michigan for land at the junction of the Kansas and Missouri Rivers.  While the band of over 650 Native Americans was still camped along the Missouri River, up to 100 of them succumbed to an illness (perhaps typhoid), and the Huron Cemetery (at 7th and Minnesota Streets) was established.

​In 1843, the Wyandots purchased 23,000 acres of land from the Delawares, including the site of the city of Wyandotte.  A treaty in 1855 allowed the Wyandots to become citizens, providing that the land was divided up so that each new citizen received about 40 acres, after reserving portions for parks, churches and burial grounds. A particularly beautiful hillside, Oakland Park, was part of the land belonging to a Native American, William Johnson, who disposed of his property upon his death to the original town company. When the town was platted in 1856, this tract was reserved as a park.  In 1863, the land was offered to the state by the city of Wyandotte as a site for a state institution. The following year, the legislature accepted the 9.6 acres as a location for the “blind asylum” (meaning a place for the care and custody of children/persons who were visually impaired). 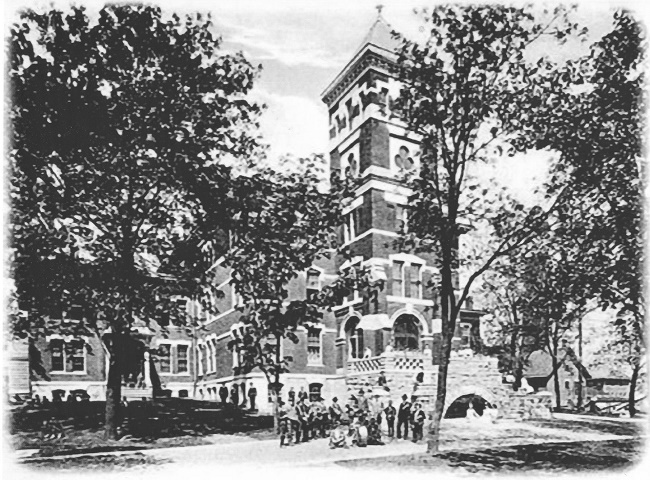 The first deed recorded in 1866 was found to be only a lease, stating that the transfer of the land to the state was to last only as long as it was used as a blind asylum, and no longer. (However, in 1881, the title to the land was given to the state.) The legislature of 1867 made the appropriation of $10,000 for the erection of the first building which was finished by October of 1867. The following March, the legislature appropriated another $10,500 with the stipulation that it not be used until 10 children who were visually impaired (ages 10-21) had applied for admission. Articles were published in local papers requesting the names and addresses of said children. By April 23rd, 1868, 11 applications had been received.

​Governor Samuel Crawford, who had appointed three men as a building committee, now named them the Board of Trustees, and hired W. H. Sawyer as the superintendent. The school most probably opened sometime in May of 1868 (with the admittance of the first five students), although various historical accounts give dates of either October of 1867 or September of 1868. The Asylum for the Blind became another state charitable institution like the Asylum for the Deaf and Dumb (founded in 1861), and continued to be so even after the school’s name was changed in 1877 to the Kansas Institution for the Education of the Blind. In 1913, the name was finally changed to the Kansas School for the Blind. During the 1969 school year, it became the Kansas State School for the Visually Handicapped to be more inclusive of those students with low vision, but this was reversed during the 1991-92 school term to the present name, Kansas State School for the Blind.

​The supervision and control of the school changed even more often than the name.  Control by its own Board of Trustees lasted until 1876, when the State Board of Charities took over. Throughout the 1890s, there was much political upheaval, which meant the wholesale removal of everyone from the superintendent on down each time the political administration of the state changed. So, everyone left to make room for the appointees of the successful party, who were often inexperienced. In 1901, the board became the State Board of Charities and Corrections (which also supervised reformatories). From 1905 until 1913, a new Board of Control of State Charitable Institutions was created by the governor with one big change. All employees and managers were appointed by the superintendent of each institution, which insured a more stable staff. 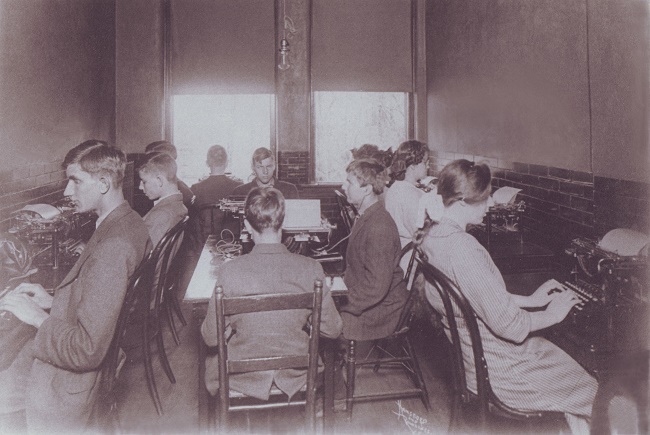 ​When the school opened (according to the First Annual Report), the bylaws provided for students whose vision was so impaired as to prevent them from attending regular schools, and who were not incapacitated by “physical, mental or moral infirmity”. These students were aged nine to 21 years old. In 1905, the legislature passed a compulsory attendance law for children who had visual impairments from the age of seven to 21.

​During the early days of the school, infectious diseases, congenital conditions, and accidents were the main causes of blindness but improved medical care and advancement in treatments and vaccines helped decrease the incidence. There was a law passed in 1929 requiring the application of silver nitrate to the eyes of newborn babies in order to prevent visual impairments due to ophthalmia neonatontum. Retinopathy of Prematurity (ROP), previously known as Retrolental Fibroplasia (RLF), was common in the 1950s amongst premature babies who received intensive neonatal care in which oxygen therapy was used to treat immature lung development. The extra concentration of oxygen caused disorganized growth of retinal blood vessels, resulting in retinal scarring and detachment. This increase in babies with RLF caused an increase in the population at the Kansas State School for the Blind (KSSB) in the late 1950s and 1960s.  There was also a rubella (German measles) epidemic in the 1960s (1962-65), which caused an increase in population at both the Kansas School for the Blind and the Kansas School for the Deaf in the late 1960s and 1970s.

By the early 1940s, some children were apparently sent to the school in order to receive treatment for their eye condition. The school ophthalmologist and the eye surgeon would offer surgery or medication if they thought improvement or restoration of vision was possible, and the parents consented. If vision was improved enough, the student went back to his neighborhood school. Eventually, the state developed other medical programs which assumed this role, and the school resumed its purely educational functions. Today the school assists parents in transporting students to local ophthalmologists, and runs a program of low vision clinics in 10 regional areas around the state with eleven optometrists and two ophthalmologists who can prescribe low vision aids. The school also contracts for the services of a general practitioner to see sick students once a week.

​From early in the school’s history, adults were admitted in order to learn a trade, as there were no other training opportunities in Kansas. They attended for six to nine months to learn a skill like broom-making, but they did not live on campus. In 1924, a two-month summer session was started for adults, teaching them literary skills and vocational training. By 1937, the state established the Division of Services for the Blind which offered vocational training, home industries and employment services for adults with visual impairments.