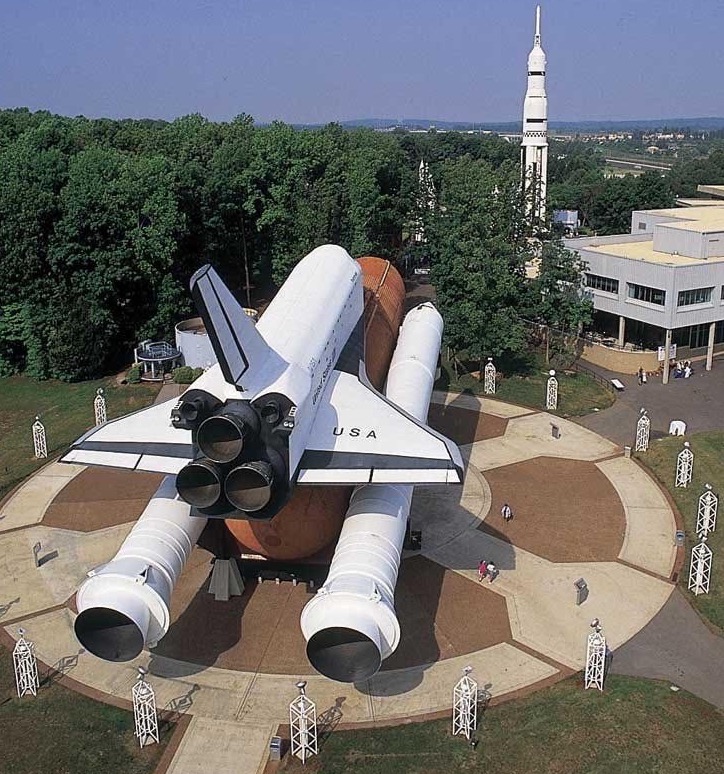 Our Experience at Space Camp for Interested Visually Impaired Students

Students from KSSB recently returned from Space Camp. They spent the week with a team of children from across the United States and around the world. They were busy from morning until night, learning about space exploration, early space missions, and how NASA partners with other space agencies around the world. They pushed themselves to participate in missions and training via simulations the way astronauts would. I had the privilege of watching children with a visual impairment from across the globe, learn about space in an exciting hands-on way. The following are their thoughts & impressions about Space Camp in Huntsville, Alabama at the U.S. Space and Rocket Center: 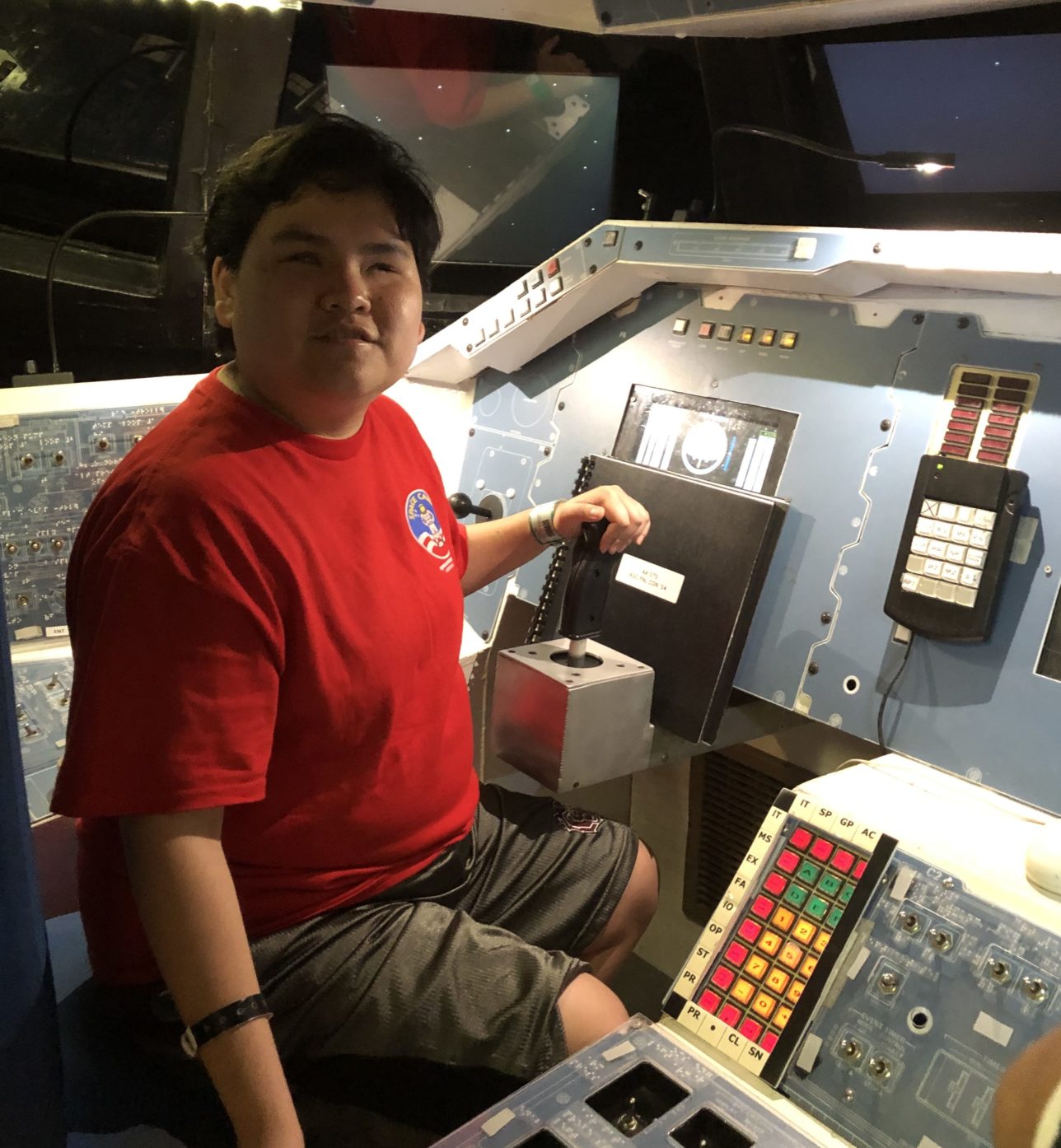 It was midnight on the 28th of September. I was lying in bed trying to fall asleep because I had to get up really early to go to the airport. I was leaving to go to Huntsville, Alabama for a week because I had a camp that I was going to. I was going to get to go to Space Camp for the final time! When I was in elementary school, I went every year. Since we moved to Kansas, I never had an opportunity to go because it was hard for me to miss school for that long, and nobody had ever heard of it before. At first, when I was asked about whether I wanted to go or not, I was a little hesitant. I’m more of a homebody. I was worried about missing school and work, and I don’t really like being around people I don’t know. However, all the nostalgia came flooding back into my body, and in the end, I had to say yes.

Once we arrived at the U.S. Space and Rocket Center, we had to do all the boring stuff like registration, orientation, unpacking, and going over rules. After we found out which team we would be on and after we met everybody on our team, the fun could begin. Throughout the week, we gained a lot of knowledge about space, but we also did a lot of enjoyable activities. We got to learn what it is like to participate in one of NASA’s missions. We experienced what it is like to be in a space shuttle, on the International Space Station (ISS), and being a part of Mission Control. Mission Control are the people who stay on earth and communicate with the space shuttle as well as the ISS. We also learned about United States history with space. We primarily focused on the space race between the Soviet Union and the United States since it is the 50th anniversary of the moon landing.

This brings me to the next enjoyable thing that we did this week. A popular thing at Space Camp is the simulators. They are pretty much like little rides that you can go on to experience outer space. The Multi-Axis Trainer is one of the rides that simulates what it would feel like to spin out of control in a spacecraft while you are entering the earth’s atmosphere. My personal favorite one is the 1/6 Gravity Chair. It’s supposed to simulate what it would be like to walk on the moon. It is called the 1/6 Gravity Chair because the moon has 1/6 the amount of gravity that earth has. The most anticipated activity was scuba diving. It was supposed to simulate neutral buoyancy. This means that you’re not floating or sinking. It was a really cool experience, but it was a little uncomfortable due to the ear pressure that would build up. The next activity that everybody looks forward to is going to the gift shop. They have a lot of fantastic items, such as flight suits, T-shirts, hoodies, water bottles, and different pins and keychains. The most unique thing is probably space ice cream. I don’t want to be a dream crusher, but it’s nothing too exciting. It’s just ice cream that has been freeze dried. The last activity that we did at Space Camp was a graduation ceremony and a party. Those are always a little nostalgic, but it was especially nostalgic for me because it was the last night that I would spend at the U.S. Space and Rocket Center. In just a few hours, I would be getting on an airplane to go back home.

There were definitely times that I had to get out of my comfort zone. Overall, it was a great experience. I’m happy I made the right decision and chose to go one last time. I am definitely glad to be home. There’s nothing in the world more comforting than sleeping in your own bed again, taking a good shower, and eating food made by your parents. It does take its toll on you since you don’t get any downtime. You’re busy doing things from the time you wake up to the time that you go to bed. I’m still trying to get back into the swing of things. 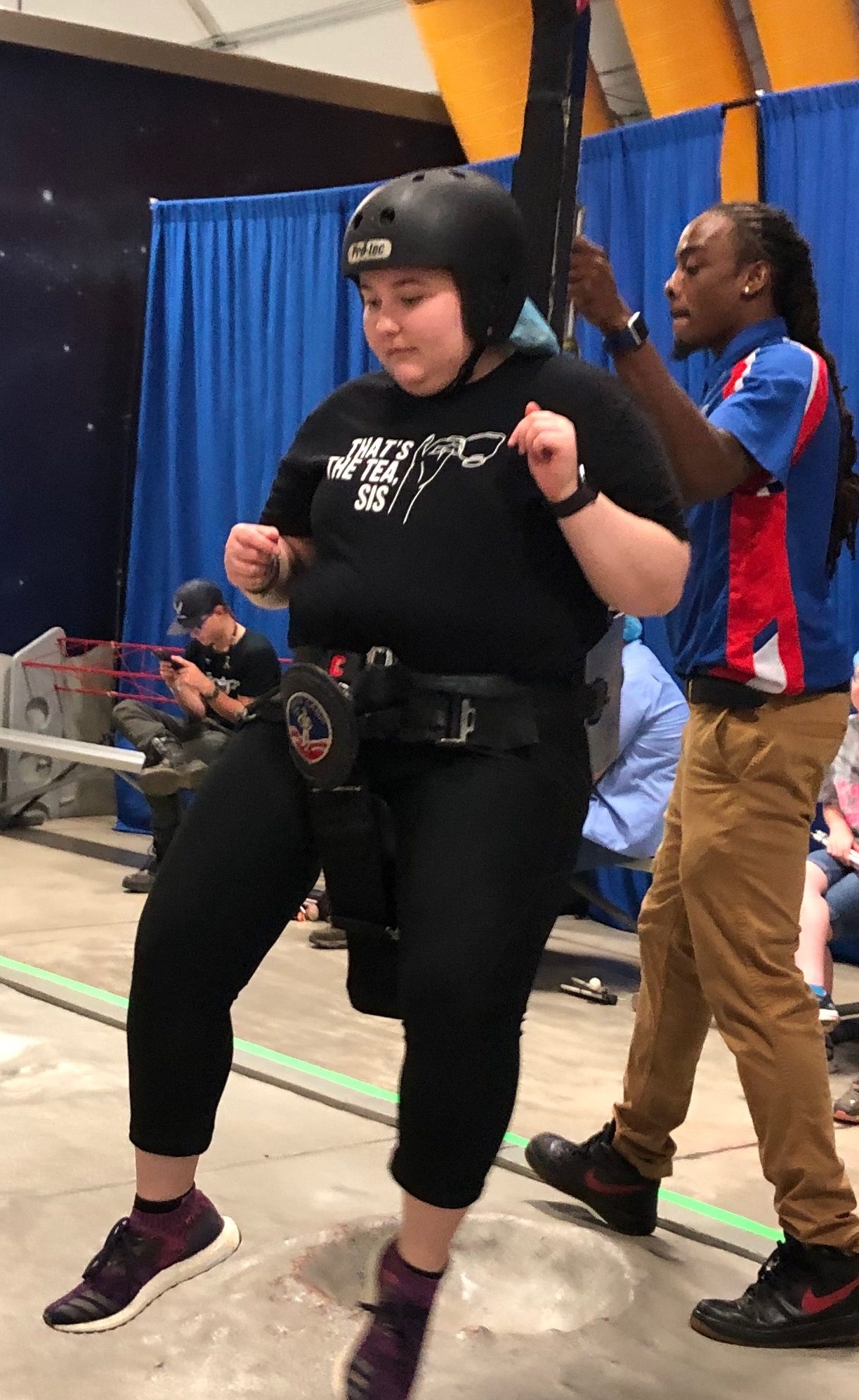 I didn’t think I would enjoy Space Camp when I first signed up for it. It was scary and new, and I’d never done anything like that, especially not after I had lost my vision in December of this past year. I was scared of being separated from my family for that long week, terrified to get on a plane, and petrified about going to a brand new place and being independent within it. When Rich, Meg & I got off the plane in Alabama, I never imagined I would go back to Kansas City, a completely new person. The whole experience really changed my perspective on not only my vision loss but all the things I can achieve in spite of it. I was around a small group of visually impaired students for the majority of the time I was there. I was absolutely fascinated with all the similarities I found, despite the fact we were from different parts of the country and even different parts of the world. I bonded with them and shared experiences, tips, and tricks we use for everyday life. I heard inspirational stories and made so many friends that I’m still in contact with, even after leaving. During Space Camp, I did things I never saw myself doing. I ziplined from 50 feet above the ground. I climbed up a 32-foot pole with barely large enough metal “staples” on the side to step on and then … jumped off. I took a spin in the Multi-Axis Trainer (MAT) that tossed me up and down like a rag doll to simulate a spiraling space shuttle plummeting back into orbit. I discovered I am a bit of a thrill-seeker, which might not be good for someone with a stress-triggered disease.

The graduation ceremony came too early in the week. If only the beds were a little more comfortable, I would have stayed and learned about the stars and galaxies forever. During the ceremony, I was certainly not expecting to be forced to stand up in front of everybody for more than just enough time to grab my certificate. However, I ended up winning an individual award. It was called the Golden Arrow Award, which is given to someone who faces adversity with optimism and a good attitude, which apparently, I have enough to win an award like that. It was a pretty surreal experience. I was not expecting to have as much fun as I did. From the award to the people, to all the crazy exciting things the Space Camp providers made us do, it might be one of the best weeks I’ve had in a long time. I would certainly recommend Space Camp to anyone, whether they’re into space or not, visually impaired, sighted, young, or old. It’s a wonderful experience with many amazing people and inspiring stories, and it’s a fantastic and educational way to spend a week. 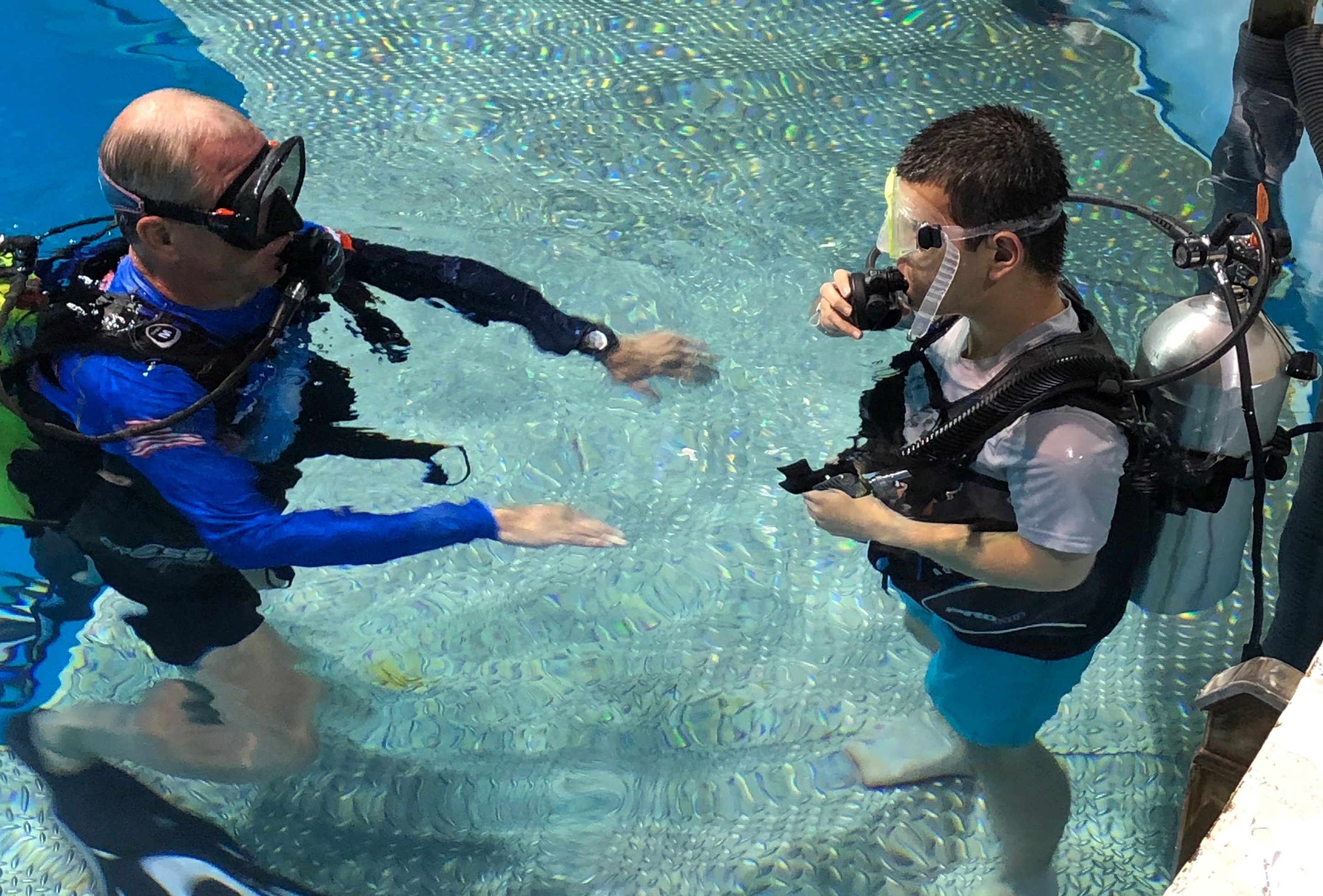 When I was first asked about Space Camp, I immediately said, “Well yeah! Let’s do this!” However, I didn’t realize how many challenges we were going to have to face. From team building, stepping out of my comfort zone, and meeting new people. Space Camp had twenty-six states and fourteen countries represented this year, so it was no surprise that I wasn’t going to know everybody. There was a total of 182 students there who were all blind or visually impaired.

I arrived nervous, scared, homesick, and overwhelmed. I didn’t think that I was going to be able to handle it all until I met Shannon. Shannon was from New Zealand and was the first one to really engage with me and talk to me. It turns out that we’re both very similar in a lot of ways. We did almost everything together, and we had the best of times. I met a lot of cool people, but Shannon was the one who stands out the most. Not only because he was my roommate, and we got along, but also how much he checked in on me to make sure I was doing okay. He was able to calm me down when I was scuba diving and before I went on the zip line, jumped off the pole, and many other things that I was unsure about.

At Space Camp, we did a lot of different activities and simulations, while also learning more about space history every day. I was in the Advanced Space Academy program, and we were able to do more activities than I could have ever imagined. The list is endless. Some of the things include but were not limited to scuba diving, ziplining, jumping off of a telephone pole, simulating a rocket launch, building rockets, etc. I can’t even begin to explain how much this camp has impacted my life, due to the activities, the food, and most importantly, the people who were always with me, encouraging me, hyping me up, and always making me smile. I will tell you, however, that when I jumped off the pole, I felt like I was flying back down to the ground. I felt like Icarus, except that I didn’t die, blow up, or whatever he did.

The best part about Space Camp’s Space Shot amusement park ride is that the ride would play Rocket Man by Elton John as we shot up into the sky, and would finish when we came down. You can never go wrong with star-shaped tater tots. I really enjoyed getting to lie down in the Mercury capsule (the first rocket that ever shot into space). I was anticipating that it was going to launch with me in it, but that never happened. I hadn’t zip lined in a few years, so it felt rather uplifting to experience that again (no pun intended). Scuba diving was probably one of my favorite parts because I got to experience neutral buoyancy, where I was neither floating or sinking. All in all, it was probably the best trip I’ve had during my schooling career. It was a fantastic experience, and I sincerely hope that more people will be able to go next year.

From Our Blog
Back To Top