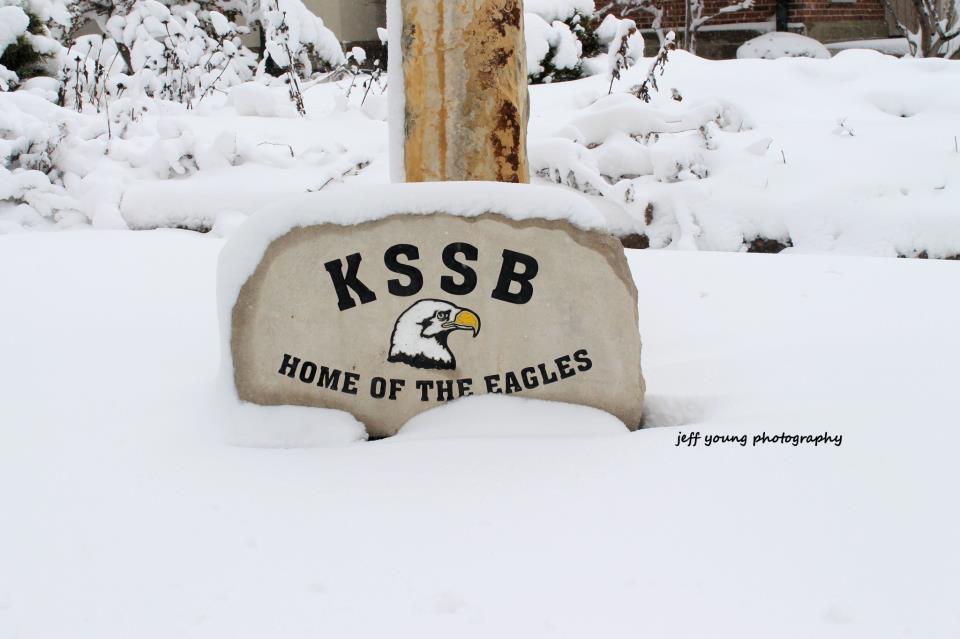 An “end of semester” holiday party was held in the Early Childhood classroom this week. Family and friends attended. The sensory table was adapted to add fun and interest for students and siblings of one student with bright colored chocolate candies hidden in the dried black beans for the children to hunt and eat. The opening of presents and eating of treats were also enjoyed. 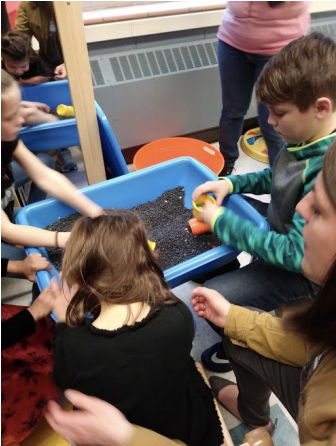 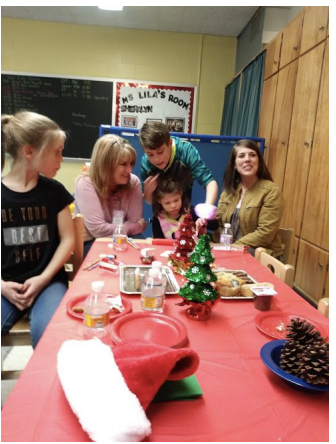 Image descriptions: In the picture on the left a group of children and adults are sitting/standing around a sensory table filled with dried black beans. Hidden in the beans are brightly wrapped Rolo chocolate candies which the children are hunting. In the second picture on the right, a student’s mother, brother, sister and grandmother are sitting/standing at a table decorated with holiday decor and trays of cookies/treats. The student’s brother is helping her to open her gift.

This month we learned about the Arctic and the animals that live there. We also talked about the Inuit people and how they live in such a cold environment. We also talked about giving to others, being appreciative and thoughtful. We made a list of people for our Christmas list, used our math skills for a budget, and went shopping. We used our orientation skills to navigate the parking lot of the restaurant, used manners while eating, and self-efficiency skills when needing something. We then shopped for our gifts and used Expanded Core Curriculum skills. This month we also took a ride on the streetcar, navigated in the city, visited Crown Center and had lunch at Fritz restaurant. 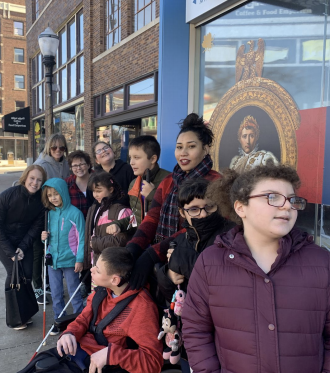 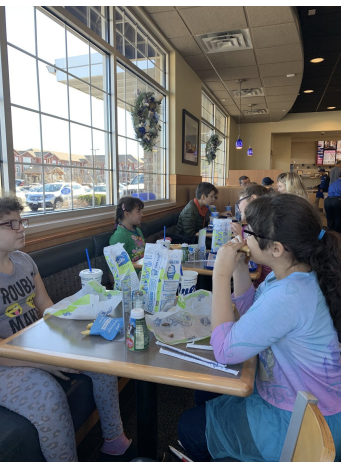 Several classes worked hard learning the fundamentals of goalball – how to throw it and how to stop it. We did some pretend ice skating, using paper bags for skates. 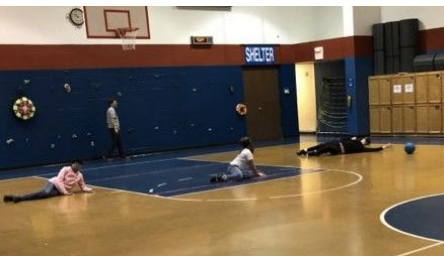 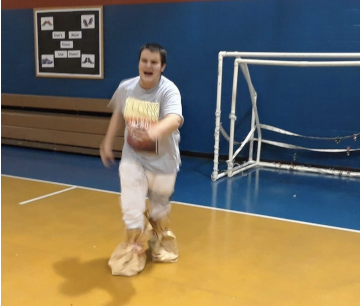 Image description: 3 students are in a position to block a ball and prevent a goal. Image description (above right): A student has paper bags on his feet and he is sliding across the floor. He has a huge smile on his face.

This month was a month of some huge moments of growth, especially for one of our newest classmates. She has become comfortable with the piano and has started using a new sign: “more” to request activities! While other students are progressing through their plans for a Spring Concert, others are having huge pre-Christmas breakthroughs! Another couple of students have had their first moments of being the “best losers ever!” They have successfully been able to accomplish being good sports and congratulating their peers on jobs well done. Another pair of students experienced an arena full of tubas and how they can cause the floors to vibrate during the annual Kansas City Symphony Tuba Christmas Concert. Check out the Life Skills update to see photos (and notice the hand feeling the floor in one picture). All of this pre-Christmas success lets us go home happy for the holidays and ready to start the new year off right! 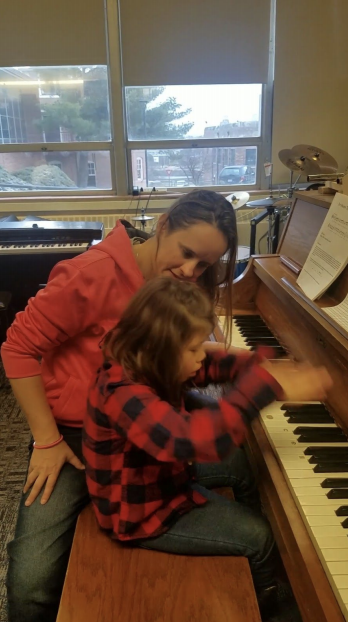 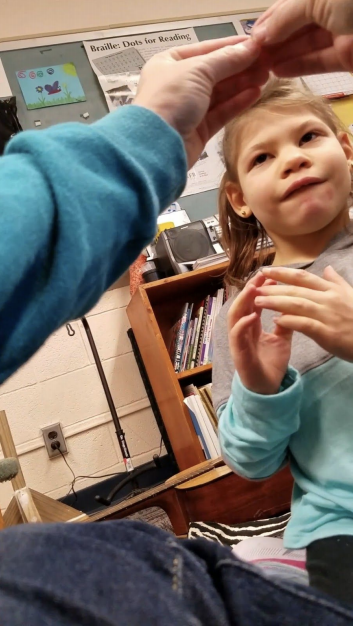 The Braille Technology class has continued to work on touch gestures with voiceover. While some students have added dictation and Siri commands to their technology toolbox, the students have also compiled a list of troubleshooting ideas as a way of problem-solving their simple technical problems. Middle School Geography class is still working on the five themes of Geography, location, place, human/environment, movement, and region. These last few weeks we have worked on the location of the seven continents and the five oceans. We also have the four hemispheres, the equator, and the prime meridian. The next challenge will be understanding how the human/environment, movement, and regions connect the world. High School American History will soon move out of early America into the American Revolution. They’ve learned that the early colonies all had their struggles, some more than others, religion always seemed to play a part, and money talked even back then. English: High School English students are enjoying an aloud read “The Giver” concentrating on the literature element of plot development of exposition and rising action. We are discussing inferencing and questioning the text as well as using context clues for several high-level vocabulary words. The middle school students have begun using an online reading site “Readworks” based on their reading levels and interests. After each story, they must answer a series of vocabulary and comprehension questions. Several students are enjoying differentiated topics and leveled reading. The students are welcome to go online anytime to read and answer the questions. The secondary teachers would like to wish everyone a very Merry Christmas and a blessed New Year. 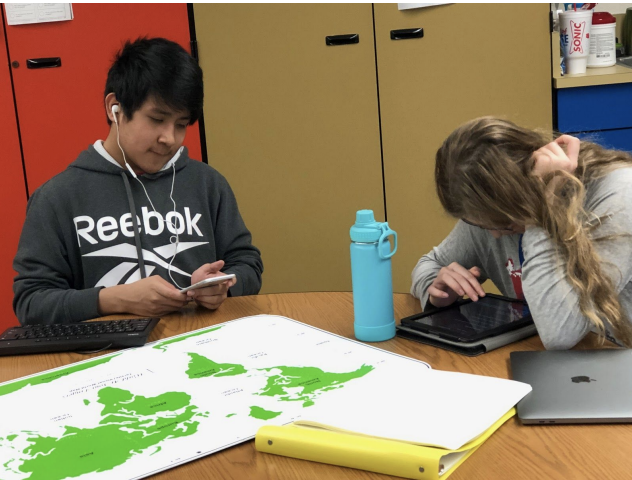 Image: Students at a round table with their supplies including a tactual map of the world, notebook, iPad, laptop, and keyboards. 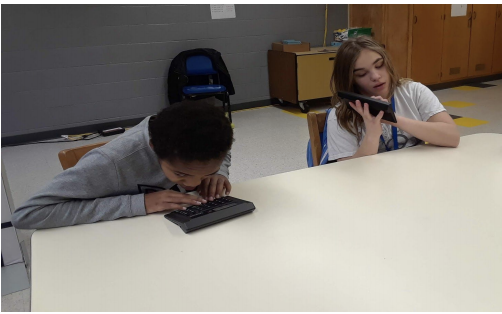 Image description: Two students sitting at square table using talking calculators. One student with a calculator on the table and looking closely at the keys and another student holding the calculator up near her eyes and holding it to her right.

Middle School Physical Science class explored the importance of good tires in the winter months by conducting an experiment using mousetrap cars. The cars were built from directions found at opens in a new windowInstructables. The wheels, which consisted of discarded CDs, were the independent variable of the experiment. In the experiment, one car had balloon material stretched over the rear wheels, a second car with the balloon material over the front wheels, the third car with all four wheels 7 covered by balloon material, and the remaining cars had no balloon material covering the wheels. The dependent variable was the distance traveled. Which do you think won the race down Vogel hallway? It was the one with all four wheels covered by balloon material. The car with covered rear wheels came in second. The conclusion was that the balloon material provided the necessary friction that allowed the wheels to rotate rather than slide down the tile floor. 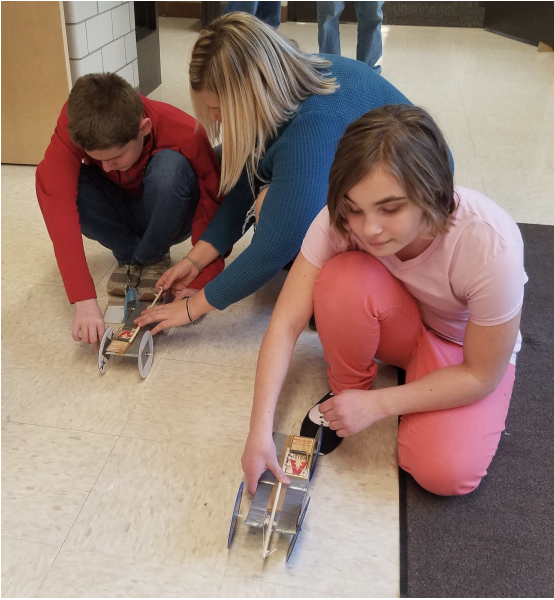 On December 7, the Life Skills class had the special opportunity to attend Kansas City’s annual Tuba Christmas Concert with Miss Jenny, our school Music Therapist. Not only did the students have the pleasure of listening to and feeling the vibration of the tuba sounds, but they were also witnessing a new Guinness World record for the largest gathering of tuba 8 performers. 832 performers gathered for this concert, the previous record was 500. That’s a lot of tubas! 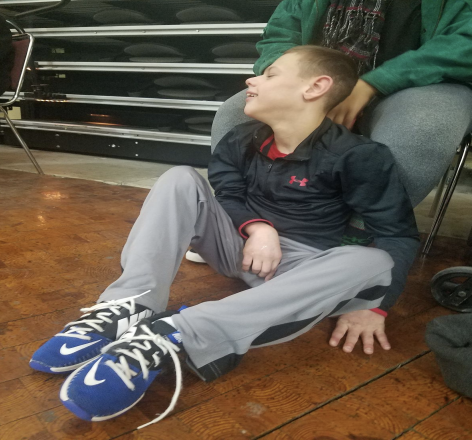 Image: Student is sitting on the floor listening to music and feeling the vibrations of the music through the floor.

The Students in the Transition Program had a busy time before the start of winter break. Some students had to take college finals, others had to finish jobs and collect letters of recommendation, while still others were busy starting new classes and getting ready for new jobs. As the 1st semester ends, students were busy preparing for the changes that are going to take place in the new year. Two students are going to begin attending the 9 Technical Education Center (TEC) in Jan., and another will continue with college. These students were busy contacting instructors and finding out what materials they needed when they return to school.

Several students will be starting new vocational experiences and several students will be preparing to look for jobs in their home communities. All of the Transition students are learning that time moves by quickly, and there is much to do, to be ready to be an independent adult. The Transition Leadership Council (TLC), planned and provided a “WinterFest” Celebration for the entire school. The Council designed games and activities for children of all ages to enjoy during the final hour of school, prior to the start of winter break. Santa Claus and Elvis even made a surprise visit. The Transition department said goodbye to two students this last week, as they return to their home communities. They take with them the experience/skills of learning to work and live as independent young adults. We wish them the best of luck as they move forward. 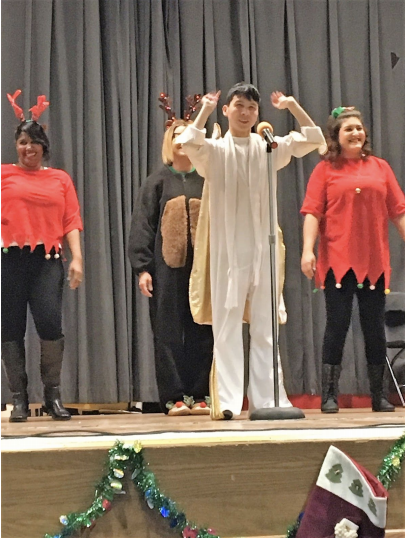 History of Orientation and Mobility

The profession of Orientation and Mobility began to develop during, and immediately after, World War II, when soldiers who had been blinded in battle were sent to recuperate at Valley Forge Army General Hospital before entering Avon Old Farms Convalescent Hospital, the U.S. Army’s former experimental rehabilitation center for blind soldiers in Avon, Connecticut. In order to better serve a large number of blind soldiers who required special training and services, the military recruited Richard E. Hoover, an army sergeant, who was assigned to the center for the treatment of blinded soldiers at Valley Forge Army Hospital in 1944. During the same year, Russell Williams, who was blinded by enemy action in France, received medical rehabilitation at the Valley Forge Army Hospital, and in 1947, C. Warren Bledsoe joined the Hospital. Both Hoover and Bledsoe had previously worked at the Maryland School for the Blind. These three men made significant contributions to the development of a new profession: Orientation and Mobility. The blinded soldiers were highly motivated to be successful, and Richard Hoover believed that the traditional strategies taught and used to travel independently were inadequate. In response, he developed a technique for using a cane that is lightweight and longer than support canes. This technique and cane revolutionized independent travel for blind people and are still used today. 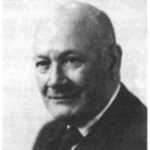 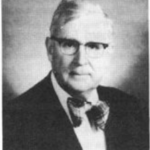 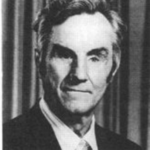 The dorm students raffled off a handmade Gingerbread house so they could buy each other gifts for our gift exchange that we had during our Christmas party. We did our own twist on the White Elephant game which gave the students choices and the decision to keep their gift or trade it to a willing participant. The staff cooked a delicious meal that we all enjoyed in the activity area. Thank you to all of the parents who took part in the parent interviews. If your child has not interviewed you yet, I will send them home with the questions. We are excited to get the first Edlund Hall newsletter out in January. I hope you all have a Happy and Safe holiday break!!

alt=”A group of kids in the dorm lounge area, standing around the white christmas making faces, gestures and having fun. ” width=”604″ height=”454″ />

(Image Above Left) A young student was able to better explore the murals in her school hallways when given a paper tube to help focus. Using systematic scanning, she was able to locate specific targets in a scavenger hunt game. (Image Above Right) Central and South Central Kansas TSVI Training Cohort met in Hutchinson to learn about cortical vision impairment(CVI). Additional training: In January, Braille Transcribers will come to KSSB for 2 days of professional development. In February, 2nd-year TSVI students will learn about writing a Learning Media Assessment. 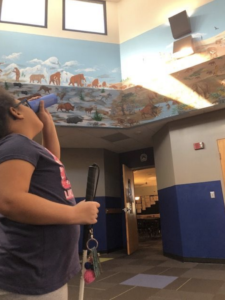 From Our Blog
Back To Top
×